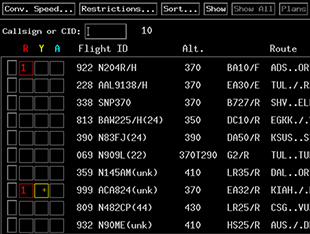 The User Request Evaluation Tool (URET) is a decision support tool for en route controllers. It provides capabilities in terms of an automated conflict probe that projects potential conflicts up to 20 minutes in the future, checks to determine that clearances are conflict-free, and allows for trial planning of route amendments to check for potential conflicts. Given these capabilities there was an expectation that controllers could handle more aircraft in their sector without excessive workload and that loss of separation incidents would be reduced since the conflict probe would enable strategic planning and conflict projection.

The URET automation was developed during the 1990s and placed in the field circa 1999. The tool was installed and was in use at all 20 US en route centers by 2006. The URET tool was part of a larger development program by MITRE Corporation called AERA that attempted to increase the level of automation in air traffic control. There is no evidence that human performance requirements were specified. The developers assumed that more information about potential conflicts would have the desired effects of decreasing workload and increasing productivity.

There was substantial testing and simulation in a laboratory environment prior to deploying the URET prototype to two en route centers for limited use on a trial basis. Human Performance on this program was principally related to the detailed design of the display screen in terms of color, symbology and other usability concerns. There was extensive use of users during all phases of the development cycle.

Mostly, this project serves as lessons learned and falls into the category of “use of automation for something other than the intended purpose.” The URET tool is being used in the field, but the main functions built into the tool are unused. URET is primarily used as a flight strip replacement tool. There is also some use of the route amendment function. Other functions are used sparingly. The conflict probe function is mostly ignored due to the perception that the “false alarm” rate is too high. For sectors that have a dynamic environment, the probe provides too many alerts that will be overcome by downstream events. More stable sectors allow the controller to easily see the potential conflict with plenty of time to resolve the situation without the use of the tool. The trial planning function is too cumbersome to use under the high workload conditions where it might prove useful.

The URET aircraft list contains all the information that controllers need about each flight in their sector which leads to its use as a replacement for paper flight strips. This is the primary success of the tool. Many en route centers were ready to do away with flights strips and this tool provided a mechanism to achieve that end. This provides a positive impact for the tool, but not as it was intended. Other functions of the tool have mixed success depending on the center’s type of traffic and airspace. There is evidence that training on the URET tool is not uniform and mainly focused on the operation of the tool rather than on its functional use in an operational setting.