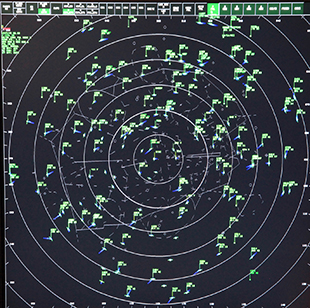 CARTS is one of the FAA's primary TRACON automation systems.

This automation related issue resulted in a loss of separation. The incident that occurred involved Airline Alpha Flight 111N (AA111N) and Airline Bravo 222 (AB222), both inbound to land with pilots of both flights cleared for the ILS approach. During the incident, the ARTS Full Data Block used to identify and track the AA111N flight dropped off the Arrival controller’s ARTS radar display while the aircraft was on an approximately 33-mile final. An AB222 flight was cleared for the ILS approach in front of the AA111N flight with an approximately 70-knot overtake. The closest proximity was less than 1nm and 500 feet approximately 12-miles from the airport. This “slow overtake” did not generate a TCAS resolution advisory (RA) for either aircraft and did not generate an ARTS conflict alert (CA) advisory.

Two separate Alpha Airlines dispatch personnel in different locations became aware of a AA111 inbound and another AA111 outbound from the airport and independently decided to add “N” to the AA111 alphanumeric call sign to correct this issue. Neither dispatch operator was aware of this coincidence nor does the Company have a method of procedure to adequately cross check. Airline dispatch operators are unaware of the potential impact that duplicate call signs have on the national airspace system (NAS) in the terminal and en-route environment (Note. The FAA’s automation system does not accept duplicate identifications including call signs, beacon codes, or computer identification (CID) numbers.)

When the outbound AA111N was ready to depart the airport, the Local 1 controller attempted to use the Common ARTS (CARTS) rundown list to properly advise the TRACON departure controller of AA111Ns departure but the CARTS rundown feature would not allow because of the duplicate call sign identifications the inbound AA111N . Independently, the Local 2 controller on overhearing the problem with the rundown made an ARTS entry to determine that there were two AA111N call signs and, after discovering this to be a fact, executed a “track-drop-slant (\)-ok” to force the inbound AA111N on the XXXX beacon code out of the ARTS. Once executed, this caused an instantaneous loss of the inbound AA111N on the TRACON approach radar controller’s ARTS radar display at 23:59:40 UTC. The Local 2 controller did not properly decipher the CARTS display of the AA111N duplicate call signs and realize that it was airborne and active in the TRACONs airspace on an ILS approach nor coordinate with the arrival radar sector controller. The Local 2 controller was unaware of the potential impact that the track-drop-slant (\)-ok” entry would have on the inbound AA111N full data block in causing it to disappear from the radar displays at the TRACON.

The approach controller slows the arriving AB222 and issues a heading to join localizer, clearing AB222 for the approach in front of AA111N, instructs the AB222 pilot to reduce speed further and finally instructs the pilot to contact the tower. About this time, discussions are occurring about an unknown data tag on final and that it must be a “ghost” target – the result of an error in the system. During this conversation, the pilot of the inbound AA111N makes the first call to query the catch up with AB222. This call causes the arrivals controller confusion as to who the AA111N is as there is not datatag for an AA111N on his radar screen. As the controller realizes that AA111N is a real aircraft and is actually the limited data inbound data block, the pilot of the inbound AA111N makes a second call to query the catch they are seeing on their TCAS display with up AB222 ahead of them. On recognizing the situation, the arrivals controller takes action to resolve the incident.